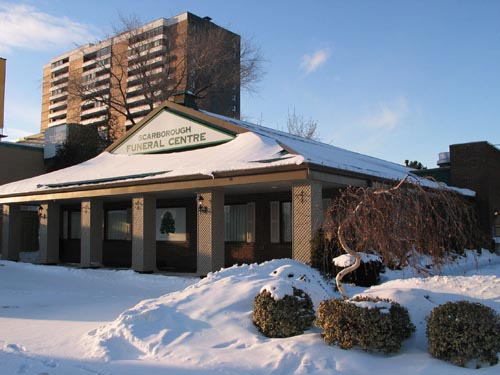 Raised in Scarborough in the ‘80s, Bill Walsh fondly remembers the Pizza Hut on Eglinton Avenue East — he went “all the time”. Never did he imagine he’d end up there again for his father’s funeral.

Such awkward moments are the result of the bizarre phenomenon of storefront conversion — when a business opens under a particular name, with a unique style of signage or architecture — like, say, a Pizza Hut — and then later, a new and incongruous business sets up shop in the same building. Like, say, the Scarborough Funeral Centre.

An unassuming (yet oddly hut-shaped) building on Eglinton east of McCowan, the funeral home’s sign reads “Modest & Dignified” these days instead of “Five Bucks Five Bucks Five Bucks”. Rebecca Hunter, funeral director for the centre, says the building’s previous life does present a small obstacle for their business.

“I think some people might have a preconceived notion before they come here that it still looks like a Pizza Hut inside,” said Hunter, who admitted that people still refer to the building as “the old Pizza Hut” despite the 1998 renovations to the façade and interior.

For Walsh, it was cost, not stuffed crust nostalgia, which led him back to Eglinton East for his father’s funeral service.

“Price was a concern,” said Walsh. “And they were in the neighbourhood, and everyone knew where it was, so it wasn’t a hassle to give directions.”

Walsh admitted that sometimes the directions were to “where the Pizza Hut used to be” and that jokes were made at the funeral about the building’s former incarnation — but that the transformation was a tasteful one.

“The place looks nothing like the Pizza Hut it used to be…it actually looked really classy inside,” said the 22-year-old web developer, who described his father’s funeral as “not bad.”

Though the Scarborough Funeral Centre may be one of Toronto’s strangest conversions, it’s hardly unique in its transmogrified charm. Just a few kilometers away is another famous former Pizza Hut — the longstanding Chinese Hut at Kennedy and Ellesmere.

The clearly identifiable roof is adorned nowadays with Chinese characters (translating to “old place”) and the words “CHINESE HUT”. Despite the clear evocation of its ancestor through architecture and name, restaurant manager Mike Wu insists that the restaurant is so established that it has its own identity.

“The customers know it’s a Chinese restaurant. They don’t ever make a mistake [and come looking for pizza],” said Wu.

Converted restaurants are abundant in the city — don’t forget to stop into Big Bites on Kingston Road (a former Dairy Queen) and Rosie’s Xpress down in Parkdale (you might want to repaint that red-and-white KFC awning again, Rosie) next time you’re in those neighbourhoods. Yet there are just as many converted service businesses around, too. Next time you’re raising a glass at Pauper’s in the Annex or renting a video at the new Rogers on Roncesvalles, let’s not forget those were handsome banks not too long ago. (It’s nice to imagine that they use the vaults to store the beer and porno movies.)

While the most bizarre conversions tend to be those that are radically different, by and large the trend is to convert from a franchise business to a non-franchise business of the same type. “Country Site” (Queen West) and “County Side” (York) donuts are clearly stores which have fallen away from the Country Style chain — albeit with little flair. (Those ubiquitous pseudo-Coffee Time donut outlets, on the other hand, seem more often than not to be knockoffs rather than former actual Coffee Time stores. Coffee Time seems to be doing quite well, in fact, and has taken over the old Dairy Queen on Gerrard Street East.)

A prime example of the “fall-away” kind of conversion is seen in the last remaining vestige of the Embassy Cleaners legacy — now another dry cleaner on Bloor Street West known as “Kembass Cleaners”. It doesn’t take a scrutinizing look to see that all that’s been done to the sign is the addition of a “K” and a large black rectangle put over Embassy’s leftover “Y”.

The store’s owner, who gives her name only as Soonia, bought the dry cleaner’s shop from a Spanish woman about 15 years ago, and claims to never think about the name.

I have no idea [what it means],” she said. “She tried to save money, eh? Only changed one letter. Maybe it means something in Spanish.”